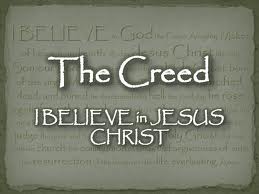 This morning our church recited the Apostles Creed. There are at least two reasons why I’m glad we do this. First, the Apostles creed is accepted by the Roman Catholic, Orthodox, and Protestant churches so it has been affirmed by Christians for over 1600 years (at least). Second, it’s the most simple of all creeds and formed the base of later creeds, such as the Nicene creed. It’s simplicity is both its weakness and its strength. Later creeds would expand upon the Apostolic creed, but they would not deny anything it contained. The church fathers named heresies because they believed a heresy was  a departure of the Christian gospel, and where the gospel was distorted or lost the Christian faith was distorted or lost. We would be well served by regularly reading and reciting these three creeds, both for our doctrinal orthodoxy and for right worship of our Triune God.

The Apostles Creed
I believe in God the Father Almighty
[Maker of heaven and earth;
And in Jesus Christ, his only Son, our Lord; Who was conceived by the Holy Ghost, born of the Virgin Mary; Suffered under Pontius Pilate, was crucified, dead and buried;
[He descended into hell (Hades)]
The third day he rose from the dead; He ascended into heaven; and sits on the right hand of God the Father Almighty; From thence he shall come to judge the quick and the dead.
I believe in the Holy Ghost; the holy catholic Church; [the communion of saints]; the forgiveness of sins; the resurrection of the body; [and the life everlasting]. Amen

The clauses in italics are those not included in the “Old Roman Creed” from around 340, but was included in the final accepted version. Compare this to the Nicene Creed (381 version), which simply amplifies the Apostles Creed.

The Nicene-Constantinopolitan Creed
We believe in one God, the Father Almighty, Maker of heaven and earth, and of all things visible and invisible;
And in one Lord Jesus Christ, the Son of God, the Only-begotten, Begotten of the Father before all ages, Light of Light, Very God of Very God, Begotten, not made; of one essence with the Father, by whom all things were made:
Who for us men and for our salvation came down from heaven, and was incarnate of the Holy Spirit and the Virgin Mary, and was made man;
And was crucified also for us under Pontius Pilate, and suffered and was buried;
And the third day He rose again, according to the Scriptures;
And ascended into heaven, and sits at the right hand of the Father;
And He shall come again with glory to judge the living and the dead, Whose kingdom shall have no end.
And we believe in the Holy Spirit, the Lord, and Giver of Life, Who proceeds from the Father, Who with the Father and the Son together is worshipped and glorified, Who spoke by the Prophets;
And we believe in one, holy, catholic, and apostolic Church.
We acknowledge one Baptism for the remission of sins.
We look for the Resurrection of the dead,
And the Life of the age to come. Amen.

Whereas the Apostles creed summarized the most basic beliefs of the early Christian faith, the Nicene creed took a stance on upholding the deity of Christ and the Triune God. The Chalcedonian Creed (451) outlines the orthodox view of the two natures of Jesus Christ.

We, then, following the holy Fathers, all with one consent, teach men to confess one and the same Son, our Lord Jesus Christ, the same perfect in Godhead and also perfect in manhood; truly God and truly man, of a reasonable [rational] soul and body; consubstantial [co-essential] with the Father according to the Godhead, and consubstantial with us according to the Manhood; in all things like unto us, without sin; begotten before all ages of the Father according to the Godhead, and in these latter days, for us and for our salvation, born of the Virgin Mary, the Mother of God, according to the Manhood; one and the same Christ, Son, Lord, only begotten, to be acknowledged in two natures, inconfusedly, unchangeably, indivisibly, inseparably; the distinction of natures being by no means taken away by the union, but rather the property of each nature being preserved, and concurring in one Person and one Subsistence, not parted or divided into two persons, but one and the same Son, and only begotten, God the Word, the Lord Jesus Christ; as the prophets from the beginning [have declared] concerning Him, and the Lord Jesus Christ Himself has taught us, and the Creed of the holy Fathers has handed down to us.

I’ve not read any of the articles but I feel comfortable recommending The Resurgence’s series on The Concise History of Creeds & Confessions to learn more.

4 thoughts on “Three Creeds Every Christian Should Know”