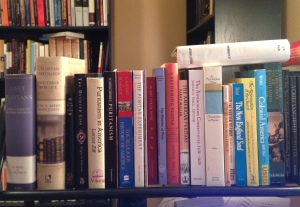 As you might be able to tell from past posts, two of my interests are Church History and American History. This summer I get the chance to do combine the two through an Independent Study on the first generation of American Puritans. Doing independent studies are in my world the ideal situation. It allows me study something I want and go more in-depth than classes often allow. In the picture above are some of the books awaiting me at my desk, although I’ve been able to recently download most of the primary works via Google Play Books. I’ll hopefully be able to post a number of blogs on my subject matter this summer so for those interested (echo) here’s why I chose this topic and some of what I’ll be doing.

Why study this?
Since the early 20th century there has been a resurgence in studying the religious landscape of America in the 17th-18th centuries, particularly in New England. However, the overwhelming majority of that research has began with Jonathan Edwards or the Great Awakening onwards. This is especially true in evangelicalism and the theological and practical works of those pre-Edwards has been largely neglected. My hope is to do two Independent Studies over the next year. The first covering roughly 1630-1670 and the second spanning from 1670-1710. I believe, and hope to demonstrate, that the first generation of American Puritans in New England was an especially rich group of pastors and theologians (not to mention politicians). They pre-date the height of English Puritanism and despite living in the “wilderness” of America they greatly influenced old and new England. They importance and richness of this first generation in my opinion has also been downplayed in part because of their Congregationalism, which has left them largely without a clear lineage among evangelicals and led to many Presbyterians downplaying their value.

As a whole I find the first generation fascinating in part because it ties in to the starting of the nation I’m a citizen of, the dangerous wilderness they were seeking to survive and cultivate interests the boy in my heart, there are neat connections tying to later figures (such as Edwards), and in recent years I’ve had a growing interest in New England as a whole.

Areas of Study
My study of the first generation of American Puritanism will include a general overview of the historical context in America, the most influential Puritan figures, and the key theological issues at that time. While leaving room for discovery made along the way, my main interests are the important figures: John Winthrop, John Cotton, Richard Mather, Thomas Hooker, Thomas Shepard, and even John Davenport. The theological issues include: the Antinomian controversy, church polity (Congregationalism), conformity vs non-conformity, the place of Harvard and other centers of training, relationship with and differences from Puritans in England, primary Puritan influences on American Puritanism, preparationism, and devotional practices.

Winthrop heads up Massachusetts and Edmund Morgan calls him the first great American. John Cotton was especially influential on John Owen and other Independents and Congregationalists on both sides of the Atlantic. Hooker took on Rutherford’s Presbyterianism and was considered by some the best pastor and preacher among the group (and Ames says the greatest mind he met). Not to mention he founds Hartford and is the father of Connecticut, and has been called “the father of democracy”, although that label might be unwarranted. Shepard greatly influences Edwards, and Mather leaves a spiritual legacy that greatly shapes the next 60 years of American religious history (for good or bad). Davenport seems to go a little off course but is worth studying because of his early influence, his founding New Haven, and he was invited to the Westminster Assembly.

Reading
Although there are some written assignments the study is primarily reading as much on the subject as I can. In order to submerge myself in the context I’m trying to read on 3 levels: what they were reading, what they were writing/preaching, and what people say about them. The first level involves trying to read who they were reading and listening too. Clearly the influence and context could stretch back endlessly and become an overwhelming task, so I’m focusing on the immediate influences. Theologically this includes especially William Perkins and William Ames, but it also includes reading the Geneva Bible and its notes (not the KJV), the Bay Psalm Book, and devotional manuals they were using for personal piety (Lewis Bayly’s The Practice of Piety). The second level is the most important and most enjoyable, primary sources. For my purposes and interests I’m focusing on the sermons and works written by the men mentioned above (Hooker, Winthrop, Shepard, Cotton, Mather) as well as the poetry of Anne Bradstreet (mainly because I really like it). The third level consists of secondary sources writing about, explaining, and arguing about the Puritans. Here’s a list of some of what I’ll be reading or consulting.