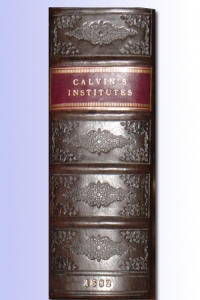 A portion of Calvin’s Institutes was written with “the fanatics” in view. These people were claiming direct revelations from the Spirit of God, often incompatible with God’s Word. Calvin’s response was a pastoral and theological defense of the inseparability of the Word and the Spirit.

“Therefore, the Spirit, promised to us, has not the task of inventing new and unheard-of revelations, or of forging a new kind of doctrine, to lead us away from the received doctrine of the gospel, but of sealing our minds with that very doctrine which is commended by the gospel.” (I.9.2)

“From this we readily understand that we ought zealously to apply ourselves both to read and to hearken to Scripture if indeed we want to receive any gain and benefit from the Spirit of God…But on the contrary, if any spirit, passing over the wisdom of God’s Word, foists another doctrine upon us, he justly deserves to be suspected of vanity and lying (Gal. 1:6-9).” (I.9.2)

“For by a kind of mutual bond the Lord has joined together the certainty of his Word and of his Spirit so that the perfect religion of the Word may abide in our minds when the Spirit, who causes us to contemplate God’s face, shines; and that we in turn may embrace the Spirit with no fear of being deceived when we recognize him in his own image, namely, in the Word. So indeed it is. God did not bring forth his Word among men for the sake of a momentary display, intending at the coming of his Spirit to abolish it. Rather, he sent down the same Spirit by whose power he had dispensed the Word, to complete his work by the efficacious confirmation of the Word.” (I.9.3)

“…Certainly a far different sobriety [than forsaking the Word for private revelations] befits the children of God, who just as they see themselves, without the Spirit of God, bereft of the whole light of truth, so are not unaware that the Word is the instrument by which the Lord dispenses the illumination of his Spirit to believers. For they know no other Spirit than him who dwelt and spoke in the apostles, and by whose oracles they are continually recalled to the hearing of the Word.” (I.9.3)

One thought on “Calvin on the Spirit and the Word”