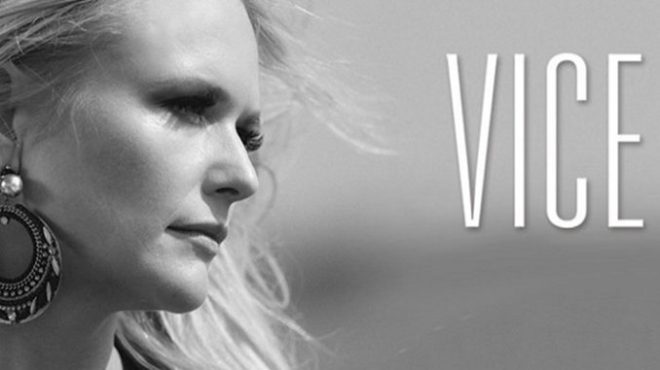 In honor of the Country Music Awards being on TV tonight (hey, it’s a good thing to watch between World Series commercials!), I thought I’d post some thought on a specific country music song. Some music is mere entertainment or to be enjoyed, but some songs actually convey the hidden thoughts and desires of the human heart in powerful, or at least insightful, ways. Miranda Lambert’s song “Vice” has intrigued me since the first time I heard it.

Occasionally a song gets at the way many people think and feel. It’s honest about the things we find delight in—even if those things are destructive—our fears, our heartbreaks, our struggles and sins, and ultimately the longings of the heart. These songs give us a story, a story that presents a relatable problem, struggle, or desire as well as a proposed solution—or the absence of any solution.

Miranda Lambert’s “Vice” fit this description and is worth listening to, enjoying, but also giving a few minutes to reflect on. The music video adds additional layers to the story within the song and is also worth a watch (assuming you’re okay with watching country music videos). At least to me, it’s a fascinating, powerful, sad, and honest song because it speaks to the longings of the human heart, the idols we pursue to fill those idols, and the bankruptcy of those idols to ever give us the things we’re looking for. The song and the video ultimately end without a solution. The “vices” aren’t so much celebrated in this song, but they’re admittedly the things we run to when in pain, confused, empty, or searching. Each of the vices fails to come through on its promise to ease the pain, provide an escape, or satisfy our thirsty hearts. This is part of what makes the song so tragic and yet so true for most people. She never finds what she was looking for and is stuck in the aimless, hopeless cycle of searching and being disappointed.

The song, written after her painful divorce with celebrity Blake Shelton, talks about vices (idols) she turns to in her own life: music, alcohol, running or escape, and sex or relationships. The movement from one to the next throughout the song suggests that none of them work. They are quick fixes in a heart looking for lasting fullness.

First, she turns to listening to “heartbreak” music, song after song about the same pain she knows all too well. “It hurts so good.” You’ve no doubt done something like this. A few moments of sitting (wallowing) in a hard emotion, hating it and yet weirdly enough finding a strange tinge of happiness in it.

Next, she turns to the bottle. This stanza might be the most honest about how we look at our “vices” or idols and see in them something they don’t really have. They look a certain way—or we see it in a different way—and they make empty promises as to what they can do for us (just remember the way Eve suddenly sees the tree and its fruit in a whole new way, Gen. 3:6; see also Eccl. 4:8 & I John 2:16).

As the song continues she mentions similar “vices” she’s turned to: running to another town, escaping problems or at least the people who know about our problems, and meaningless sex and band-aid relationships. She’s not able to find solutions, comfort, satisfaction, peace, or fulfillment. Instead, she only finds “another vice.” How does she describe the way she sees her situation? She knows she hasn’t found what she’s looking for and she doesn’t even like what she’s turned to, or turned into.

“Standing at the sink now, looking at the mirror
Don’t know where I am or how I got here”

Her vices have not only not come through on their promises but they’ve caught her in a self-destructive, soul-emptying cycle. The music video itself is interesting because it shows her life as a car wreck, as chaos she can’t escape, and as a journey looking for something. She wants wholeness but succumbs to the next empty car that shows up (temptation, vice, idol). As she gets into that car at the end we should assume it won’t get her to her desired destination, but will end like the video starts: another traumatic wreck. Another painful, disappointing ending. Another idol that robs us of the joy that only knowing, worshipping, and delighting in the true God provides.

In my opinion, “Vice” is an honest song worth listening to but also a song that Christians can speak into. Our vices/idols might look different, and hopefully the Christian fights against them and finds freedom from them, but the struggles and temptations are similar.

One thought on “Miranda Lambert’s “Vice””